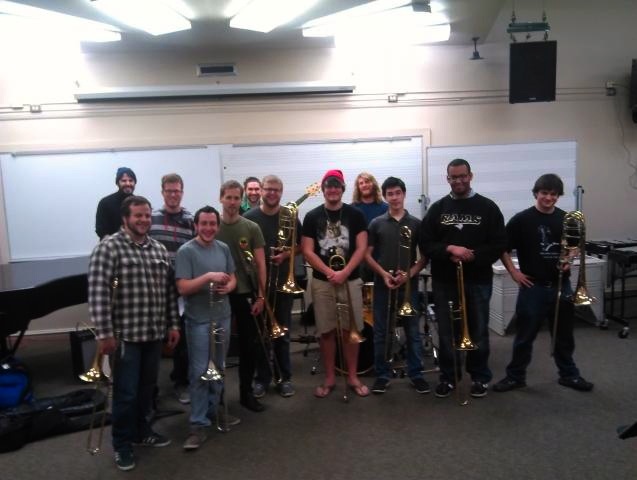 The U-Tubes, a jazz trombone ensemble at the University of North Texas, was founded by Professor Steve Wiest in 2007.  Consisting of six tenors and two bass trombones, along with piano, bass, drums and guitar, the U-Tubes focuses on exciting modern jazz.  Most of the music in the group’s library is a student arrangement or original composition, and the group is directed by a graduate teaching fellow.  Students that have written/arranged for the U-Tubes have won several awards, including the USAF Sammy Nestico Award, the BMI Foundation’s Charlie Parker Composition Award, and Downbeat Magazine Student Awards.  Most recently, two of the group’s composers were nominated for a Grammy with UNT’s world-renowned 1 O’Clock Lab Band.

The U-Tubes was the winner of the 2008 International Trombone Association Kai Winding Jazz Trombone Ensemble Award.  Most recently, the group won the 2010 Eastern Trombone Workshop National Jazz Trombone Ensemble Competition.  They have also performed at the Denton Arts and Jazz Festival, and are active in the Dallas/Ft. Worth area, performing concerts and clinics at local jazz venues and high schools.  The U-Tubes have also performed with trombonists Jim Pugh, Eijiro Nakagawa, Tom Brantley, Steve Davis, Michael Dease, Marshall Gilkes, and Tom “Bones” Malone.