The University of Texas Trombone Choir 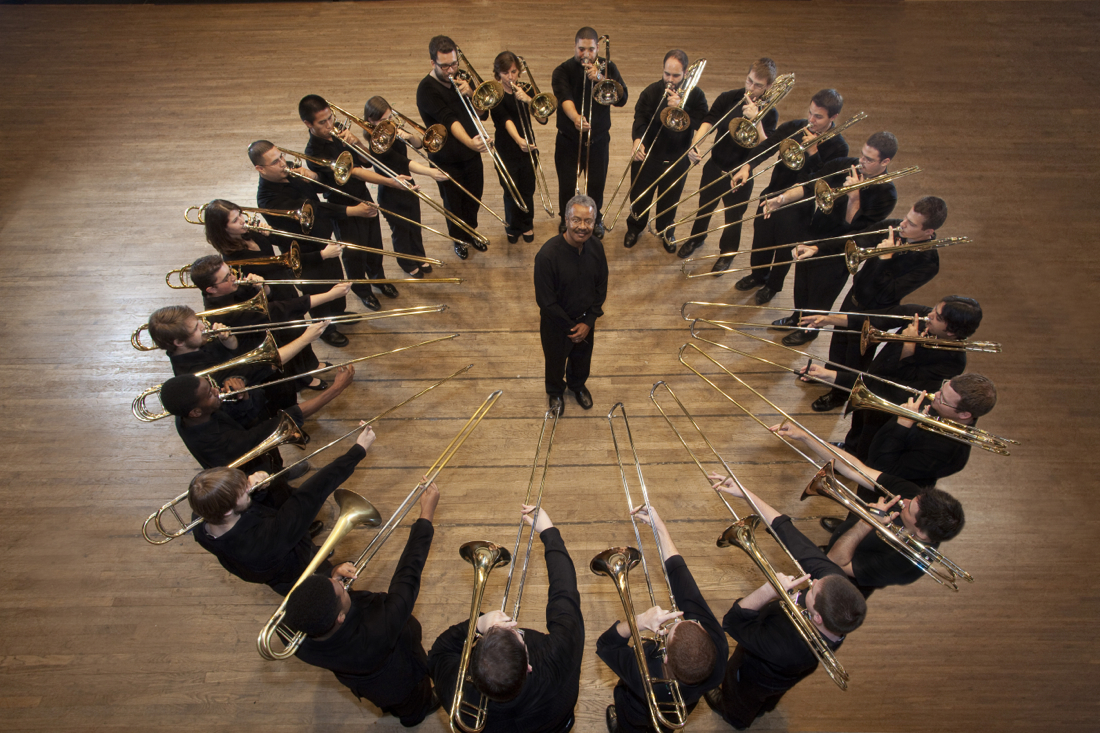 The University of Texas Trombone Choir serves as a laboratory extension of the UT Trombone Studio. As a testament to the group’s artistry, the UT Trombone Choir was invited to perform at the 2012 International Trombone Festival in Paris, France. While in Europe, the ensemble performed on concert series at the American Church in Paris, the French Protestant Church in Zurich (Switzerland), and at the Schwenningen Music Festival (Germany) to

enthusiastic response, at times playing to audiences of over 30,000 people. In 2014, the ensemble performed in Denmark’s two largest cities – Aarhus and Copenhagen, and were named runner-up in the Remington International Trombone Choir Competition.

UT Trombone Choir members were named winners of the 2013 and 2012 International Trombone Quartet Competitions, the 2007 and 2002 Remington International Trombone Choir Competitions and were featured at the 2009, 2006 and 2002 Eastern Trombone Workshop in Washington DC. They also presented a showcase performance at the Kennedy Center in the US capital in March of 2006, one of the first trombone choirs to be so honored. The Choir conducted a three-city tour of Brazil during the summer of 2004, performing and presenting masterclasses at universities in Rio de Janeiro (Rio de Janeiro Federal University) and Sao Paulo (Santa Marcelina University) en route to a showcase concert at the Brazilian Trombone Festival at Universidade do Vale do Rio dos Sinos in Porto Alegre. Trip highlights included a performance and interview on South America’s most popular TV talk show, “Programa do Jo”; and a standing-room-only performance for nearly 2,000 attendees in Rio’s oldest and most important cathedral, Igreja da Candelaria. Their CD, Christmas with the UT Trombone
Choir, was submitted by the recording industry for Grammy Nomination consideration. The UT Jazz Bones, a more recent addition to the UT trombone ensemble lineup, was named winner of the 2001 and 2007 International Trombone Association’s Kai Winding Jazz Trombone Ensemble Competition, and the 2007 ETW Jazz Trombone Ensemble competition.