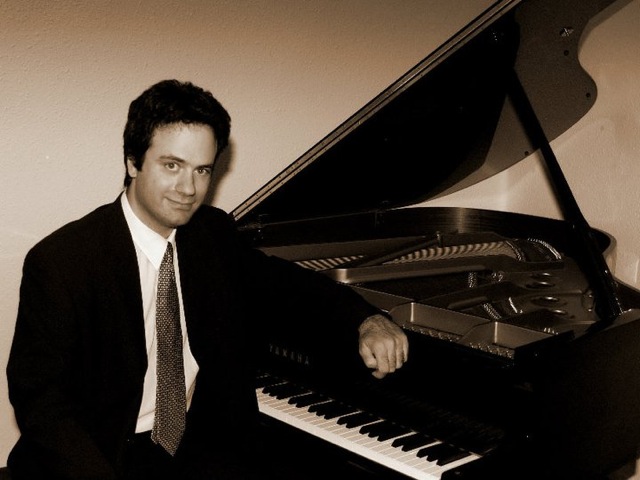 Born in Athens, he took his first piano lessons at the age of 9. 3 years later entered the class of Myrto Mavrikou in the National Conservatory of Athens, with a scholarship. He graduated at the age of 16, with the highest distinction of the Conservatory.

He has performed with Orchestras such as Sofia Symphony, Symphony Orchestra of the Spanish Radio and Television, the Valencia Symphony Orchestra, the Valencia Opera Orchestra Palau de les Arts Reina Sofia, and also has collaborated with the Orchestre the Paris. He has worked with conductors such as Lorin Maazel, Zubin Mehta, Yaron Traub, Adrian Leaper, Neeme Järvi, Oliver Gilmoure, Walter Weller, Jacob Kreizberg, Mikhail Jurowski among others. He has given recitals, performed with orchestra and played Chamber Music in concert halls like Sala Bulgaria in Sofia, Gasteig and Residenz in Munich, Mirabell in Salzburg, Teatro Monumental in Madrid, Palau de la Musica in Valencia, Palau de la Musica in Barcelona, Palau de les Arts Reina Sofia, Salle Pleyel and Salle Cortot in Paris, Principal Theatre and Auditorio in Castellón, Cervantes Theatre in Malaga, Kursaal in San Sebastián, Arriaga Theatre in Bilbao, CAEM in Salamanca, Auditorio in León, among others.

He has given recitals with soloists of the Berliner Philarmoniker, the Wiener Philarmoniker, the Wiener Symphoniker, the Hungarian State Opera Orchestra, the Barcelona Symphony Orchestra, such as Hansjörg Schellenberger, Benoît Fromanger, Bela Kovács, Reinhard Wieser, Ernst Ottensamer, Enrico onofri, Magdalena Martínez, Ruben Marqués etc., as well as many solo recitals, in France, Germany, Austria, Spain, Switzerland, Bulgaria, Belgium and has also given various Masterclasses as a chamber music and piano professor.

Stefanos Spanopoulos speaks 7 languages and was a Champion in the 5th National Mathematical Olympiad at the age of 11.