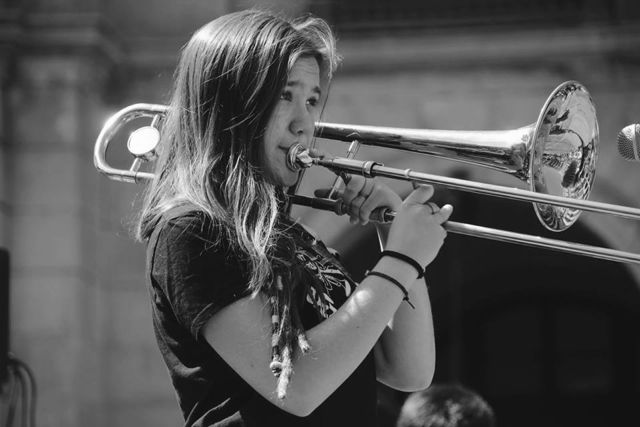 Rita Payés Rome, was born in 1999 in Vilassar de Mar (Barcelona). She has lived Music with intensity and proximity since she was a child (her parents are musicians) and began studying at the School of Music in Premià de Mar, initially playing the piano with Montse Massaguer. At the age of 8 years, at the School of Modern Music in Badalona, she added trombone to his studies with David Sanabria and then for about 6 years with Joan Palacio. She is currently studying 4th ESO at the School Oriol Martorell (integrated music training center) and his trombone teacher is Jordi Gomez. Occasionally she receives trombone lessons and music from Toni Belenguer. From 2012 she has become interested in the voice and gets singing lessons from Judith Nedermann and Steve Genís.

She has participated in summer courses and workshops organized by Camerata XXI Musical Avignon (with Victor Correa).

She has played and sung in several big bands, jazz bands and combos; EMM in Premia de Mar, the EMM Badalona, the Big Band under the direction of Òrrius … Pere Paye, Josep Traver, Carles Vecino, Joan Moragues … In July 2013 she entered the Sant Andreu Jazz Band, under the direction of Joan Chamorro and since then she has made a huge musical progression. taking part in many concerts in different formats (Barcelona Jazz Festival, Jazz Jamboree Club Auditorium, Barnaswing, Summer Festivals in several villages of Catalonia, concerts in Almería, Valencia, France, Switzerland …), and also a 2 CD edition of “Joan Chamorro presents Magic Voice” along with the voices and music of Andrea Motis, Eva Fernández and Magali Datzira and Ignasi Terraza (piano ), Josep Traver (guitar), Esteve Pi (drums) and Joan Chamorro (bass and sax), and the CD “Joan Chamorro presents Rita Payés”, with the participation of all the musicians mentioned above and Scott Robinson, Scott Hamilton, Dick Oats, Toni Belenguer, Jo Krause … among others.