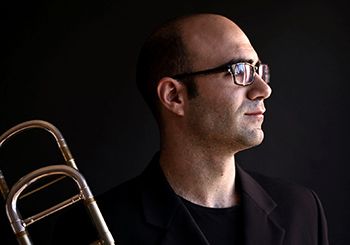 Born in Moncada in 1985, Matamoros began his music studies with Ángel Tomás at the Musical and Artistic Centre of Moncada. He later continued his studies at the Middle Level at the Valencia’s “José Iturbi” Municipal Conservatory where he obtained an Honour Award in the field of Trombone and Chamber Music. He completed his studies under the guidance of Enrique Cotolí at the Royal Conservatory of Music in Madrid where he once again was given an Honour Award for Trombone. He went to complete his post-graduate studies at the University of Arts in Berlin with professors Stefan Schulz and Andreas Klein from 2006 to 2008. He was a member of the Spanish Brass Academy for more than ten years with Indalecio Bonet and Carlos Gil.

As a member of 2i2quartet, he is intimately involved in the performance and pedagogical aspect of the group. His also a founding member of the quintet “Mediterranean Chamber Brass,” who has won 1st Prize for Brass Quintets at the 5th Annueal Jeju International Brass Competition, 3rd Prize at the Jan Koetsier Competition for Brass Quintets (Munich 2008), and 1st Prize at the Lieksa International Brass Quintet Competition in 2009. The group continues to tour within Spain, Europe, and Asia.

In 2013, he decided to release his first CD Música y Filantropía.

He is currently a solo trombonist with Spain’s National Orchestra and a professor at the Madrid-Stomvi Trombone Academy.

J.C. Matamoros uses the Titán line of instruments from Stomvi.