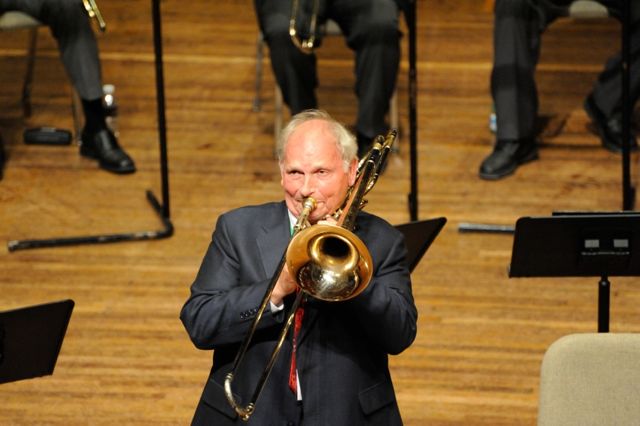 Dr. Irvin L. Wagner is a positive, enthusiastic musician who enjoys making good music in all styles. He is Professor of Trombone at the University of Oklahoma where he holds two distinguished titles: one as David Ross Boyd Professor of Music and the other as a Regents Professor of Music. In addition, he is a recognized conductor and trombone artist and can frequently be heard and seen in various corners of the world as a conductor, trombonist, or teacher. Recently he has been a guest at TROMBONAZA in Argentina, SLIDERASIA in Hong Kong, and the IPV German Trombone Festival in Rostock, Germany.

Complimentary to his regular duties at the University he has had a long association as trombonist in the Oklahoma City Philharmonic Orchestra. He also enjoys a successful conducting career having served frequently as a guest conductor of the Oklahoma City Philharmonic, The Austin (Texas) Symphony Orchestra where he conducts ballet performances and children’s concerts, and the Kansas City Symphony Orchestra. Other orchestras around the world that he has conducted include the Russian Imperial Orchestra in St., Petersburg, Russia, the Cannes Symphony Orchestra in France, and the Orquesta Sinfonica de Santa Fe, Argentina.

Professor Wagner also composes and arranges a considerable amount of music. His compositions and arrangements for Trombone Choir enjoy the status of being a staple in the industry all over the world. And it is to be noted that his arrangements of standard tunes for Symphony Orchestra are frequently performed in the USA and around the world.

Irv served as President of the International Trombone Association from 1982-84, and during his tenure traveled completely around the world performing, teaching, and organizing national trombone chapters in such countries as Japan, New Zealand, South Africa, Israel, Greece, and Great Britain. This activity around the world resulted in him being “the Most Listened to Trombonist in the World in the 80’s” as he was heard by more than a quarter of the population of the earth. This came about through his public performances in over 30 countries and especially through a Television Special in China viewed by over 600 million people and a radio recital in India listened to by 500 million people.

Dr. Wagner holds a Bachelor’s Degree from McPherson College, as well as Master’s and Doctor’s Degrees from the Eastman School of Music. At Eastman he was a student of the late master teacher of the trombone, Emory Remington.