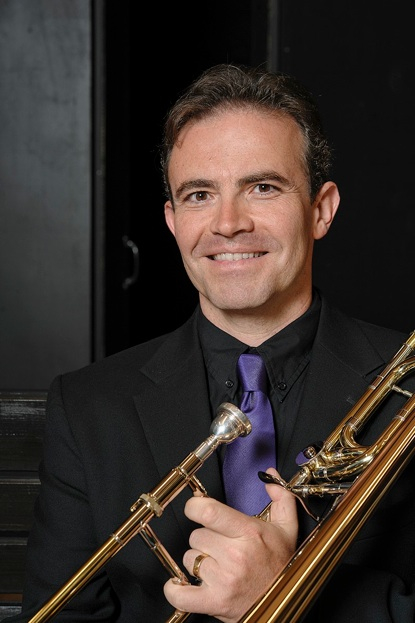 Henri-Michel Garzia studied at the Conservatoire National Supérieur de Musique de Paris, where he obtained first prizes in Trombone Performance and Chamber Music.  He was principal trombone of l’Orchestre des Concerts Lamoureux from 1990-1992, and is currently principal trombone of Sinfonieorchester Basel, a position he holds since 1992.  Mr. Garzia is also principal trombone of Capella Andrea Barca, under the direction of world renowned pianist Andras Schiff.  Henri-Michel Garzia has collaborated with orchestras such as the Boston Symphony Orchestra, Tonhalle Orchestra of Zurich, Bamberg Symphony Orchestra, Orchestre National de l’Opéra de Paris, l’Ensemble Orchestral de Paris, Orchestre Philharmonique de Radio- France, and with baroque ensembles such as the Munich Gabrieli Consort, Swiss Baroque Soloists, les Cornets Noirs, and the Cetra Basel.  In 1998 Mr. Garzia received the Trophy for Culture from the city of Mulhouse for his work with the Grand Ensemble de Cuivres d’Alsace, an ensemble which he founded and presided (until 2005). Henri-Michel Garzia is a sought-after pedagogue, having given masterclasses at the University of Georgia at Athens (USA) , Brassweek Limoges, the Royal Conservatory of Morocco, and the Nanyang School of Fine Arts in Singapore.

Henri-Michel Garzia took part in the ITF festival in Paris in 2012  as well as in the Festival Européen de Trombone in Strasbourg in 2014, as a recitalist.

He is a faculty member at the Conservatoire de Musique à Rayonnement Départemental du Pays de Montbéliard (France), where he teaches tenor, alto and baroque trombone.