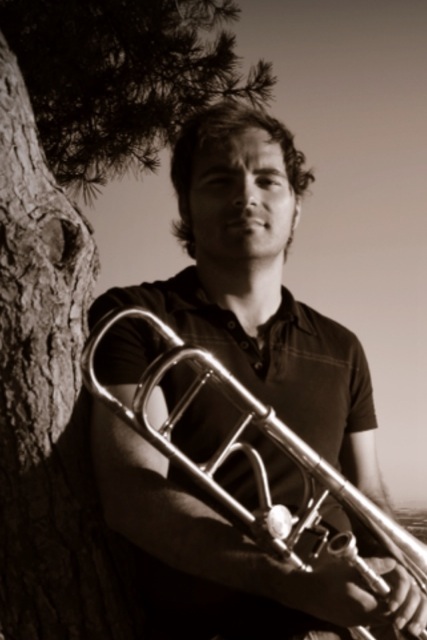 He has attended numerous master classes with teachers Gilles Miliere, Michel Becquet, Baltasar Perelló, Raul Garcia, Stephan Loyer, Jean Pierre Matheu, Stefan Geiger, Christian Lindberg, Falk Maertens, Peter von Wienhardt, Reinhold Friedrich, etc.
He was a founder-member of the brass group Tunocco-brass and is currently a member of TROMBUMBA group.
He has been awarded the second prize in the Chamber Music Contest of Alcaniz (Teruel 1999), Cycle of Young Performers by Ibercaja 2002, Second Prize of the 2nd National Contest of Interpretation Intercentros (Advanced Level), the Special Prize for best instrumentalist in brass-wind in the 3rd edition of the Competition and Improvement of Ibercaja Scholarship 2005.

He has performed as a soloist accompanied by the Symphonic Band of the Zaragoza CPM in the Mozart Hall Auditorium in Zaragoza, with the Banda Municipal of Calahorra playing the “T-Bone” concerto for trombone and band by Johan de Meij and with the Symphonic Band CSM Zaragoza with the “Trombone Concerto” by Salvador Brotons.

As a teacher, he has participated in important training courses and masterclasses conducted throughout the entire Aragonese and Spanish geography highlighting the Course for Trombone in Leciñena (Zaragoza) for its relevance.

He has taught trombone at the Municipal Music School in Calahorra (La Rioja), as well as in the music schools in the Aragonese towns of Villanueva de Gallego, Alagon and Gallur.

In July 2006 he obtained a position as a teacher for the Music and Performing Arts Faculty in the community of Aragon and is currently active teaching in the CP Music of Huesca.
In addition to his training as a trombonist he is a certified Primary Teacher in the Music specialty by the University of Zaragoza.